Edit: in this post I am referring to AU2018 in Las Vegas, not any other event.

Because I’m seeing lots of people saying they’re not going. People who haven’t missed it for many years. When Robert Green announced his forthcoming non-attendance on Facebook, I was amazed to see so many prominent long-term Autodesk loyalists do likewise. Here are a few comments:

OUCH! With all the people I know who won’t be there, AU is going to be a lonely place this year.

Especially with half of Autodesk gone!

Whilst certainly not a long standing attendee as Robert, I also won’t be at AU this year. Gonna miss you guys

This is getting REALLY sucky now.

Now you’re making me wonder how many more won’t be there and if I should reevaluate my plan to go.

I probably won’t be there either. I’m pretty pissed at Autodesk for letting go of so many people (Heidi Hewett & Lynn Allen). My boss said he will not send me again because he’s just now feeling the pain of the rental plan. I might want to check out the Bricsys conference or start blogging about BricsCAD.

FWIW, if none of my classes get accepted I’ll be taking a pass as well.

At this point I expect the same.

In light of post AU2017 fallout, wondering how many more will not be going.

Given what has happened since, really glad I got to AU last year.

Clearly a lot of the Autodesk people I looked forward to seeing won’t be there this year.

The most obvious absence will undoubtedly be Lynn Allen:

Well…I will certainly miss my friends…but I don’t think I could possibly bear attending AU this year.

This wasn’t news to me, because a couple of weeks ago I had already asked Lynn on Twitter: 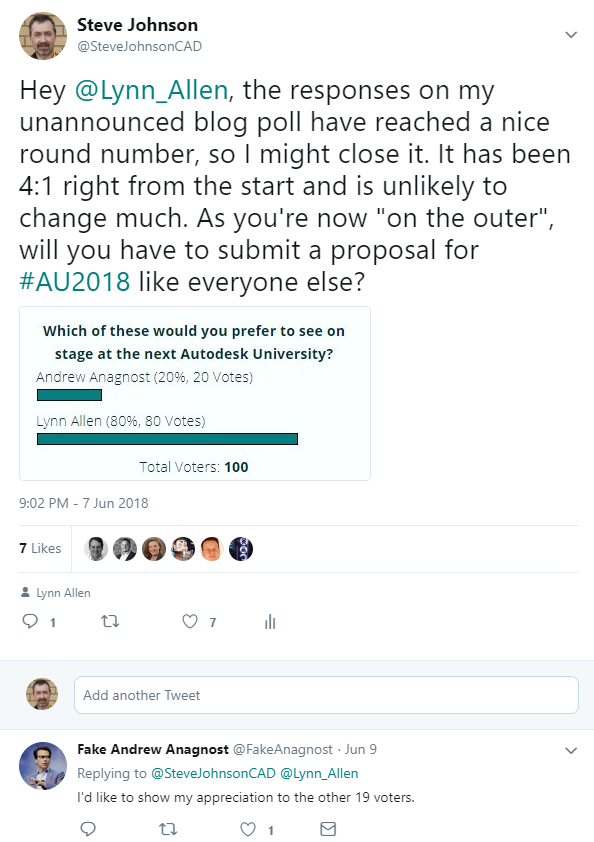 Her reply came as a shock to some: 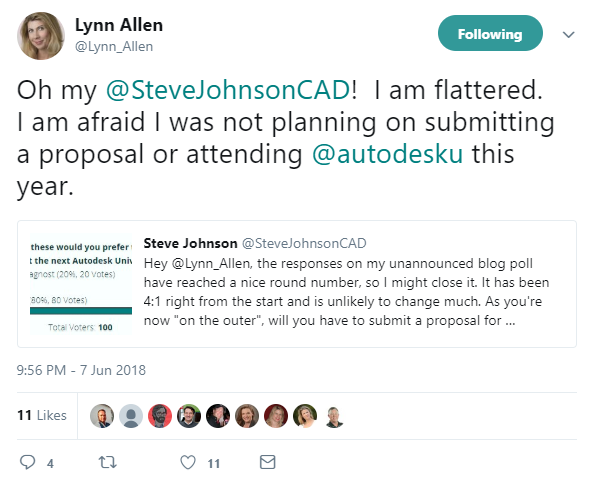 As Lynn taught the most popular class there for over 15 years with over 800 people crammed in a room and more wanting to get in, that’s a sizeable hole to fill.

Looking at the AU class proposals, there are a bunch of people attempting to fill the hole. There are no less than five “60 tips in 60 minutes” class proposals. One of them in particular used Lynn’s name in perhaps the not most sensitive way, given that we’re talking about somebody who recently lost their job. That didn’t go down too well: 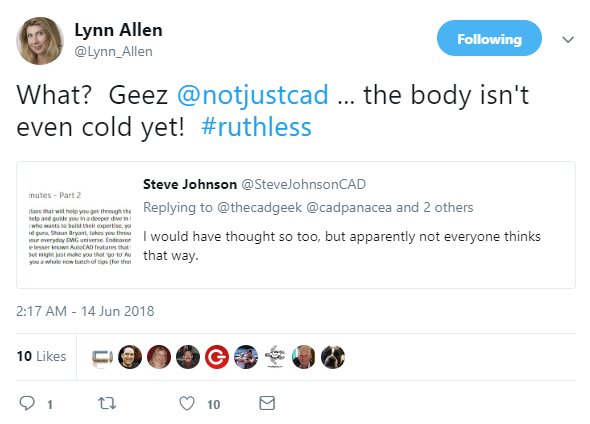 Don’t get me wrong. Despite my opening paragraph, and despite many significant absences (including the excellent Joseph Wurcher and his 14 years of experience running the show), I expect AU 2018 to still be a big, spectacular, successful, fun event. It will still be attended by thousands and will have many useful classes. Even if the networking won’t be what it was, it may still be well worth your while to attend.

But if you want to hang out with the cool people (and me!) and learn about CAD software that’s actually moving forward, maybe you should visit London for the Bricsys 2018 conference instead.