In February 2010, I ran a poll to gauge your feelings about CAD in the Cloud and left it going until October 2010. Just over a month ago, I asked the same question again and ran an identical poll. I have closed that second poll, and here are the comparative results (new poll at the top, old poll at the bottom): 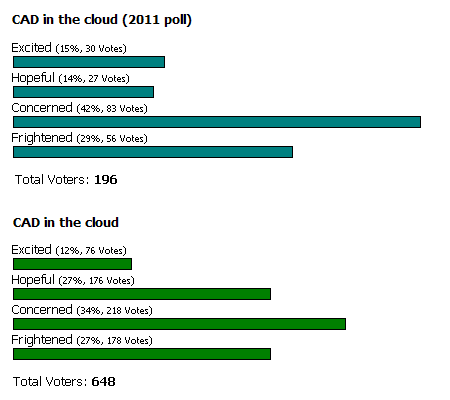 I’m not pretending this is a scientific survey. There is bound to be some self-selection and other sources of bias, as there must be with anybody’s survey processes (very much including Autodesk’s CIP). Looking at the logs, I haven’t detected any obvious attempts to interfere with the poll, although there’s nothing I can do to stop people voting multiple times if they have access to multiple IPs (e.g. a work and home account). There are fewer votes in the newer poll only because I didn’t let it run nearly as long; the rate of voting actually doubled this year.

Caveats aside, what can we say about the way in which poll respondents’ views have changed in the last 18 months or so? The most obvious change is a marked reduction in the proportion of people who now feel Hopeful. There is a small increase in the number of voters who are now Excited or Frightened, but a big leap in those who are Concerned.

Combining the two positive choices (Excited and Hopeful) to come up with a simple “Cloud approval rating”, in 2010 39% of voters were positive about CAD in the Cloud. In 2011 that number is down to 29%. In other words, people voting Cloud-positive are about a quarter down on last year.

Most poll respondents here are Autodesk customers, so I think it’s fair to say that this result reflects poorly on the effectiveness of Autodesk’s Cloud marketing. After a year of providing an increasing selection of Cloud products free of charge, and a big Autodesk Cloud launch and publicity immediately before the poll, one would expect a lot more people to be sold on the Cloud, rather than the reverse. I don’t see that Autodesk has done anything atypically bad with its Cloud marketing (certainly nothing like Dassault’s SolidWorks train wreck), so what’s going on? Is CAD on the Cloud really an unsellable prospect?