In an earlier post, I asked for your votes on a pair of polls regarding Autodesk’s replacement for Carl Bass as CEO.

Here are the final results from those polls. Although the details of who voted and for what will remain strictly and permanently confidential, I found it interesting to see a number of votes logged from IPs that originate from a well-known software company. I will get no more specific than that.

First, here’s who you think is most likely to be appointed: 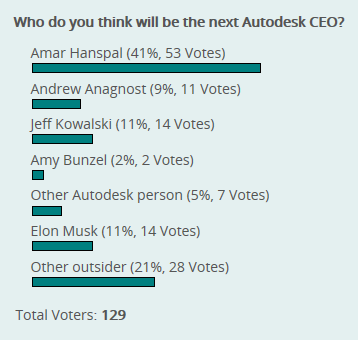 Amar’s well ahead in the “person most likely” poll. But note the contrast with who you actually want to be the next Autodesk CEO, where outsiders get bigger numbers. Anyone would think people reading this blog aren’t happy with what the Autodesk candidates have been doing and would like to see a change. 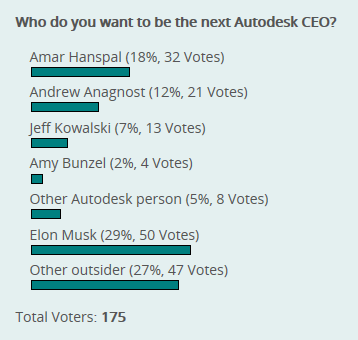 Despite Elon Musk’s popularity, I suspect he may be a little too occupied right now to take on the Autodesk job and give it the attention it deserves.

Among CAD notables I talked with in Ghent, the general view was that the delay in the appointment of a CEO is bad news for current co-CEOs Amar and Andrew; if the Autodesk board was going to give the job to one of them that would have already happened.

I’m not so sure about that. The board might be so happy with the job A & A are doing that they feel there is no rush, but who knows? Maybe the board is struggling to find somebody else with a name where (wcmatch ceoname “Car*l Ba*”) returns T. Maybe one of the dynamic duo has already filled out the deed poll forms and will emerge as Carmel Bartholemew or something.