In my effusive welcome of AutoCAD 2013’s updated Help system, I wondered if I had been shocked into missing some glaring problem. Unfortunately, that’s exactly what happened. In my enthusiasm, I managed to totally miss the fact that the new system has not been introduced for offline users.

If you use the new system, there’s a link on the front page to the offline files. I got as far as downloading and installing what I thought was the offline version of the new system and discovered that it didn’t want to install because the old one was already installed. What I should have then done, and didn’t, was to uninstall the old and install the new, before running it in offline mode. I intended to get around to that to check the performance and responsiveness of the respective versions, but didn’t have the time right then. If I had done so, I would have noticed that my download, uninstall and reinstall would have been in vain, because the offline version pointed to by the new system is still the old version. My apologies to anybody who wasted their time because of what I originally wrote.

There are many legitimate reasons why Autodesk customers want or need to use their software, including the documentation, entirely in offline mode. For example, the users I manage can’t access the online Help system from AutoCAD because Autodesk writes its software in such a way as to fail in a secure proxy server environment (yes, this has been reported as a bug, repeatedly). So for my users and many others, it’s true to say that despite the best efforts of Dieter and his team, AutoCAD 2013’s Help still sucks.

Look at this from the point of view of such offline AutoCAD 2013 Help users. We pay large amounts of money for software and Subscription. No “entitled” 99-cent users here.  We’ve provided extensive feedback on the woeful system that was inflicted on us at release time. We’ve hung out for half a release cycle with no adequate stopgap, even though one could easily have been provided. A small team has finally wrought an outstanding improvement and deserves congratulations for doing so. The improved system is dangled in front of our faces, and then we discover that we’re not allowed to have it. Not for any plausible technical or resourcing reason, but because Autodesk simply doesn’t want us to have it. How are we supposed to feel about that?

That’s right. Autodesk has managed to snatch a crushing defeat from the jaws of what should have been a stunning victory. I guess I should have expected something like this; for Autodesk, the half-baked job is de rigeur. But this goes beyond the usual problem of countless features that would have been great if they had been finished. This isn’t a matter of a product team struggling to develop features adequately within an impossible timeframe imposed by the yearly release cycle. This is a matter of policy. Some Pointy Haired Boss at Autodesk has decided to deliberately disenfranchise a significant group of its paying customers, by refusing to make available something that already exists and could easily be provided. This adds insult to the injury of having to wait 6 months for a CHM stopgap that was clearly the right thing to do, but which never came.

Why? What on earth would lead anyone to even contemplate the possibility that this might be a good idea? Lack of resources? While I’m quite aware that individual parts of Autodesk have their own budgets and limited resources, I don’t buy that as an excuse for the organisation as a whole. A multi-billion-dollar corporation that pays its executives millions? One that just threw away $60M on a dud social media buyout? Crying poor over something that would have cost maybe a few thousand? Sure, sounds legit.

No, a lack of resources is not the reason. It’s a policy issue. “There’s no reason for it, it’s just policy.”  But why would such an anti-customer policy exist? Vision. Autodesk is currently led by a Cloudy Vision. It’s important to Autodesk that everything Cloudy looks good. It’s clearly not enough to actually make online stuff work well. For one thing, that’s obviously pretty difficult, judging from Autodesk’s offerings to date. No, anything that’s offline has to be made to work badly, so the comparison looks as favourable as it possibly can. That’s much easier to arrange.

That’s why there was no CHM solution on the release date, despite Autodesk having a set of unpaid volunteers ready to put the thing together. That’s why there was no CHM solution provided a week later, or a month later, or six months later. Don’t think that it wasn’t provided because of a lack of resources; that excuse is entirely specious. It wasn’t provided because it would have made the online version look bad in comparison. The online version already looked abysmal, but an offline CHM solution would have just made the comparison so ridiculously one-sided that nobody would have been in any doubt about what a terrible idea on-line Help was. The Cloudy Vision would have looked suspect at best, and we can’t have that, can we?

What Autodesk wants is for people to think “Cloud good, non-Cloud bad”. If the Cloud can’t be made good, then making non-Cloud bad will have to act as substitute. Loading the dice in this way might stand a chance of working if customers were as clueless as some Autodesk decision-makers, but most of us aren’t total idiots. We notice these things.

This is a line-in-the-sand issue. This is about Autodesk pushing its vision at the expense of customers. No news there then, but from my point of view, this is one step too far. This is the tipping point where the not-convinced-about-the-Cloud phase could well turn into a full-scale take-your-Cloud-and-shove-it customer revolt. Me? I’m quite prepared to hand out the pitchforks and torches. 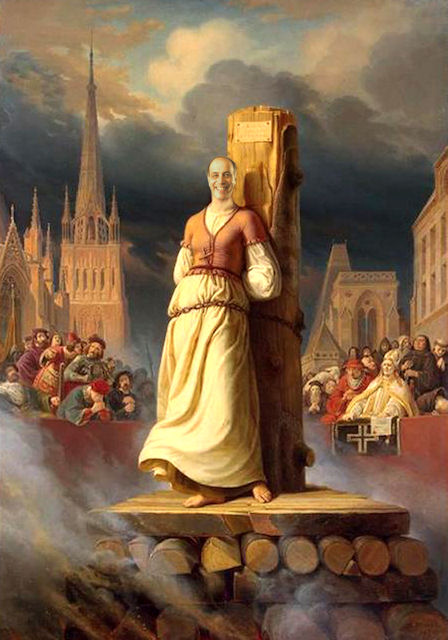 Carl Bass, you need to pull your troops into line. Let them know that while your Vision is important, implementing it must never come at the expense of common sense. It must definitely, never, ever come at the expense of your customers’ needs.  Blindly following a Cloudy Vision didn’t end well for Joan of Arc, and it’s unlikely to end well for Autodesk either. Please remember the source of Autodesk’s income. Without customers, you are nothing. You are treating your customers badly, and worse, treating us as idiots. Please, give it up before we give you up.