It’s probably unwise to make predictions about what is going to happen in technology. If so, I’m about to be unwise. So be it; if I’m wrong you can taunt me about this post in a few years. Here’s my prediction:

Autodesk’s attempt to move CAD users onto the Cloud is doomed to failure.

This is the first of a series of posts that will examine what I mean by that and the reasons behind it. The first thing that’s important to lay out is what I mean by failure. What I mean is that reality will not match Autodesk’s expectation of what will happen with its products moving to the Cloud. What expectation is that?

I’d say two to three years from now, every one of our products will be used online. The only way to use them will be online.

So let’s say you’re an AutoCAD user. A successful Cloud push by Autodesk will mean that you and very large numbers of people just like you be using AutoCAD or an equivalent Autodesk product on the Cloud by 2014 or 2015. If that doesn’t happen for you and all the other users of Autodesk products, then that’s failure by definition. Autodesk will have failed to meet its own publicly stated goal, and that’s exactly what I’m expecting to happen. While it might look to a Cloudophile that I’m swimming against the tide of inevitability, I’m not alone here. Let’s examine what this blog’s poll respondents think about the chances of them using CAD in the Cloud: 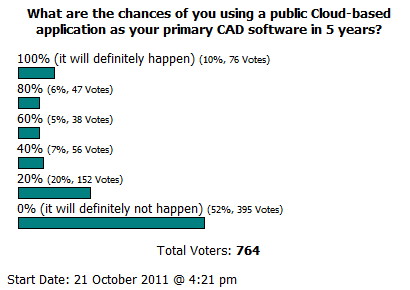 (Snapshot taken a couple of weeks ago; more votes but no percentage change since then).

The poll has been running for nearly a year and attracted a sizeable number of votes. More than half of the respondents are convinced that there is absolutely no chance – zero – that they will be using a public Cloud-based application as their primary CAD software in the next five years (by 2016 or 2017, two years beyond Carl Bass’s stated target of universal Autodesk online operation). There is a group of respondents equally convinced that they definitely will be using such an application. However, with only 10% of votes, this group is outnumbered 5:1 among those who feel certain about what is going to happen. If we split all the votes into those who think there’s a better than even chance of a Cloudy future (21%) and those who think there’s a less than even chance of that happening (79%), you can see that the doubters again have a very clear majority, nearly 4:1.

While the usual caveats about polls apply, it would be a very foolish Autodesk executive who believed this poll to be some kind of an aberration that does not reflect the broad views of the CAD community. I am convinced there is a dichotomy between the expectations of Autodesk and those of its customers, and that spells trouble. Autodesk is either going to succeed in pushing its customers into a future they are not expecting, or it is going to fail and be forced to revise its expectations. I predict that the latter will happen, and I will explain my reasoning in future posts.