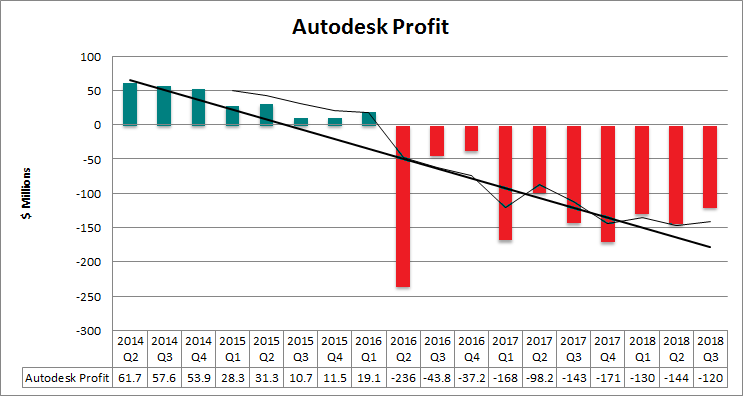 Autodesk’s share price had been rapidly rising during the previous nine lossy quarters. If last quarter’s $119.8 million loss was business as usual, why did the ADSK share price plummet? At the time of writing, it’s $23.65 down on its pre-Q3-results high.

Alongside the usual we’re-doing-great stuff in the Q3 announcement, Autodesk announced big layoffs, with another 13% of the workforce to go. Merry Christmas, employees. This follows on from another 10% who were axed last year. Don’t think I’m gloating about this. I’m not; these are real people with real jobs, many of them undoubtedly very good people, and they have my sympathy.

But doesn’t the market love companies cutting jobs? Maybe not when the bill is going to be $135 to $149 million when the CEO states it’s not going to cut costs anyway:

Every penny generated reinvested back in the company – just in different areas: digital infrastructure and construction products. We’ll hire at least that number back. Not cost cutting. Rebalancing.

It may not have helped if traders noticed the Autodesk CFO selling stock on 24 November, a few days before the 2018 Q3 financials were out? This was smart, because he made about $113,000 more on that transaction than he would have if he had sold on 29 November. I’m not suggesting there was anything improper about this, but it was hardly a confidence-inspiring move.

Edit: From R. Scott Herren via Twitter: “…that sale was a 10b5-1 planned sale setup more than 6 months ago. You can find that info on the SEC filing.”

But I suspect it’s just Autodesk’s ongoing failure to pull itself out of the loss trough and desperate-looking need to shed workers that has started to erode confidence in the veracity of its repetitive “Another Great Quarter!” narrative. Maybe the market has started to look a bit deeper than just giving Autodesk a simplistic “it’s OK, revenue always dips when moving to subscription” free kick? Maybe the oft-quoted “new subscriptions” metric has lost its shine as it becomes apparent that subscription numbers aren’t directly proportional to income? 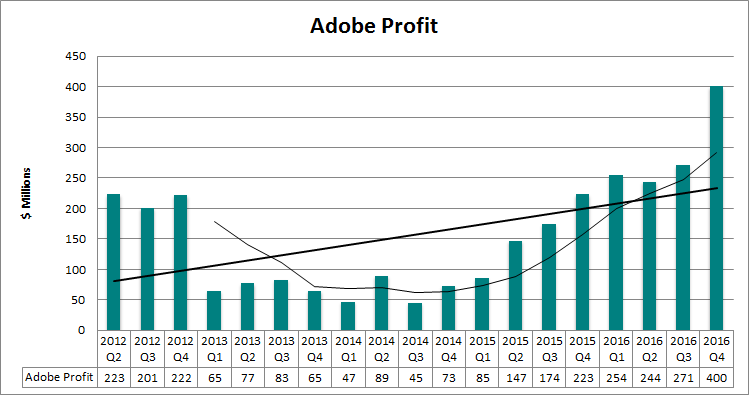 All is not well with Autodesk’s subscribe-or-GTFO plan, and it looks like people other than customers have started to notice. Autodesk’s bubble has been pricked and some rapid deflation has occurred. Time will tell whether this is a blip or a trend.

Disclaimer: I am not a financial analyst. This is not financial advice. Make your own decisions.