Autodesk co-founder John Walker (it’s not his fault, he relinquished control of the company many years ago) recently posted this on Twitter: 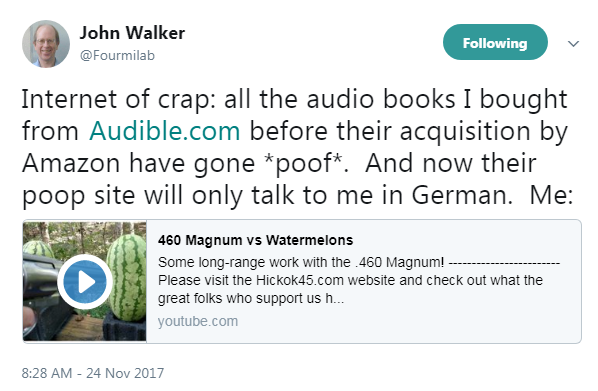 In a move reminiscent of the infamous removal of Orwell’s 1984 from Kindle devices (which Amazon promised a court it would never repeat), John’s Audible.com (owned by Amazon) audio books, purchased in 2009-2010, simply went away.

John’s reaction was to post a video of harmless inanimate objects being blown away by a powerful firearm, so I think it’s safe to say he was not overly pleased about this turn of events. Can’t say I blame him.

This is a variant of the old joke on those cheesy pre-show anti-piracy ads that have annoyed owners of legitimately purchased videos for many years:

“You wouldn’t steal a car.”
– I would if I could download it.

“You wouldn’t steal a book.”
– I would if I could delete it from my server.

OK, Amazon is obviously doing evil here, but what can John do about it? Maybe nothing. As pointed out in a series of responses to John’s post, Amazon considers itself fully entitled to do this. Amazon also allows itself permission to change the rules as and when it sees fit. 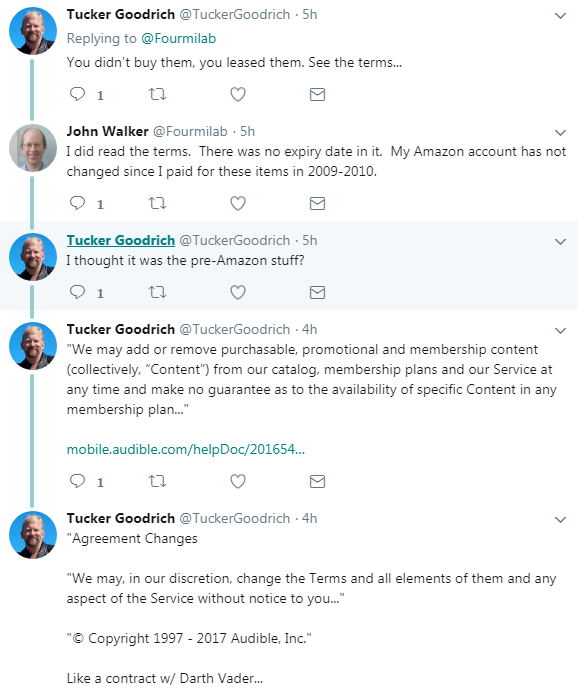 This is why we don’t CAD in the cloud. Or subscription CAD, for that matter. Owning stuff is still important.