In the past, I’ve described how AutoCAD for Mac was released half-baked (as I predicted) and has remained half-baked ever since.

But wait! Autodesk has proudly announced AutoCAD 2018 for Mac. Skimming through that blog post, I must admit my jaw dropped when I saw some of the new features. This one, for example: 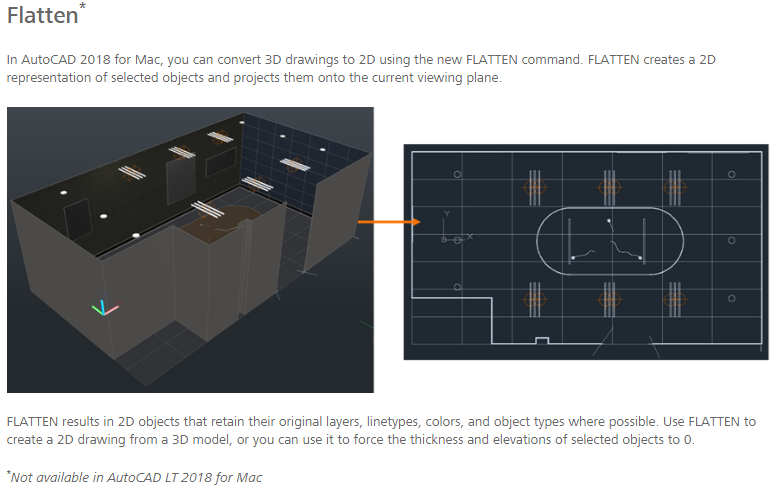 This “new feature” was first provided to AutoCAD users in the 20th century. It was an Express Tool in AutoCAD 2000 (released 1999) and was absorbed into mainstream AutoCAD a few years later. The alias editor goes back even further, to the Release 14 Bonus Tools (1997). That one was absorbed into AutoCAD in 1999. Some of the other new features are also old. Migrating your settings was new back in the century that started without powered flight. Now, not so much.

These features are new to AutoCAD for Mac, of course, and that’s kind of the point. Autodesk is advertising, as new, features that were born before some of the adults who are now using their products.

There are other very important features (e.g. DCL support, essential for LISP compatibility) that date back even longer (Release 12, 1992) and which are still missing from AutoCAD for Mac. That’s right, in some areas AutoCAD for Mac is a quarter of a century behind. And counting.

On the bright side, you do now get access to the pointlessly-changed 2018 DWG format. A couple of features are reasonably new additions, but they represent a small subset of the small number of minor improvements in AutoCAD 2017 and 2018 for Windows. If anything, the rate of improvement of AutoCAD for Mac is lagging behind even the glacial progress of AutoCAD for Windows, despite starting from a much lower base point.

I note with interest that Autodesk’s comparison page is now hiding the detail of the differences between the full product and AutoCAD for Mac. I guess if you have two identically-priced products and one’s missing a bunch of stuff, you might be tempted to hide the fact from your potential customers. This post of mine from last year will give you some idea of what Autodesk’s not telling you about what’s missing from AutoCAD for Mac. Clue: it’s a lot.

Mac users pay full price for their product and deserve much better than this. If you want information on a full-featured “AutoCAD for Mac”, don’t bother looking for it from Autodesk. Try Bricsys instead.