In this final post of the series, I’ll examine the patterns that have emerged from the upgrade history I rated in parts 1 to 4. Bear in mind I’m only assessing the DOS (up to R13) and Windows (from R12 on) versions of the full version of AutoCAD. Of course, this only represents my opinion of those releases and is bound to be biased by the uses I and my users have for the software. Your experiences and opinions will almost certainly vary.

What can I say? My assessment is based on a third of a century of experience, and I’ve tried to be as objective as I can. I’m not unique in perceiving the decline of the AutoCAD upgrade; you’ll see the same said by long-standing customers and experienced independents all over the place. Ralph Grabowski, for example:

The new feature list for AutoCAD’s annual “big-R” release has become so short that I stopped producing my annual “What’s Inside? AutoCAD” ebook series in 2013.

Back to my own assessment, here’s a graph that shows how I rated the releases: 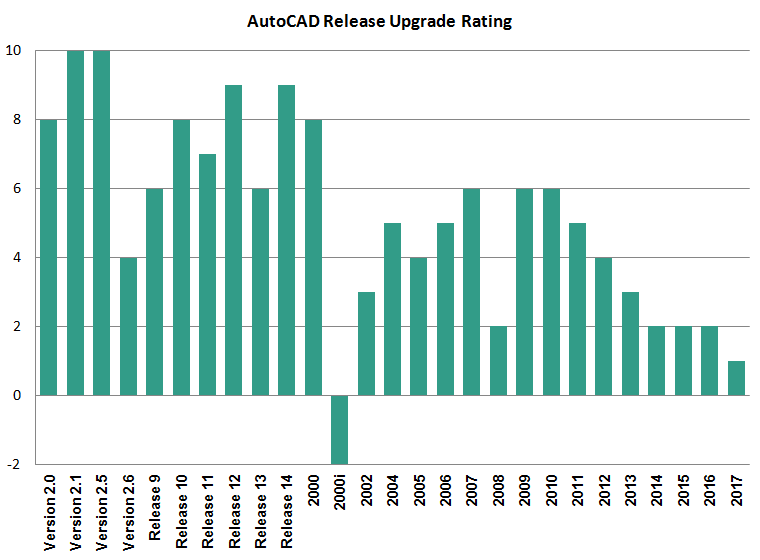 One thing’s obvious and that’s the permanent drop in the rate of improvement that set in with the onset of the annual release cycle. My average rating for AutoCAD Version 2.0 to 2000 is 7.7. For 2000i to 2017, it’s 3.4. Autodesk switched to doing half as much worthwhile development between releases, but charged the same upgrade fee. Value for money halved.

We entered the era of an endless stream of annual releases with fewer genuinely useful new features. Worse, the abbreviated cycle meant most of those features went into production half-baked in design, implementation or both. Some of those undercooked features (the lucky ones) got some attention in the next release. Many more of them never got fixed, or got quietly removed later, or eventually got patched up years after the user base had ignored them to death.

Have a look at the decline from 2010 downwards. The average for the last five releases is 2.0. The rate of improvement per release, starting from a low point, took a nose dive. Value for money, which was poor, is now dire. 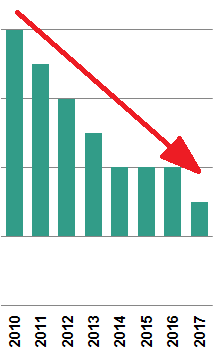 Conclusion? AutoCAD is in maintenance mode. Autodesk’s attention (and investment) is elsewhere and it is just going through the motions of updating the software. Progress has stalled. Inspiration is AWOL.

Nevertheless, through all this, we have still paid for new releases in various ways, and in huge numbers. No wonder Autodesk is convinced we’ll be silly enough to pay over the odds to rent software; there’s a precedent.

The more Autodesk has moved away from the optional upgrade model, through optional maintenance*, then effectively compulsory maintenance**, then finally to the compulsory rental model***, the weaker the upgrades have become. Autodesk no longer feels compelled to put in the development effort that will convince customers to shell out for the advantages provided by a new release.

Autodesk wants an endless revenue stream in return for merely providing access to the software, rather than as a reward for improving it: money for nothing. That’s Autodesk’s dream, and an understandable one. For customers, it’s a nightmare: nothing for money.

* Maintenance was previously called VIP and then Subscription.
** Autodesk restricted the availability of upgrades, priced it out of the market, and in some cases only sold perpetual licenses bundled with maintenance, before finally eliminating upgrades altogether.
*** Autodesk’s third attempt at rental (there were failed attempts in 2001 and 2013) was first called Desktop Subscription and then just subscription. I generally call it rental to avoid confusion with The Maintenance Formerly Known as Subscription.