Back in 2011, Autodesk, some other vendors and many industry pundits were utterly convinced of the inevitable and near-imminent victory of Cloud-based CAD over standalone software. I wasn’t. I wanted to get a feel for how isolated my viewpoint was, so I started a poll and let it run for a while. Here’s how that turned out: 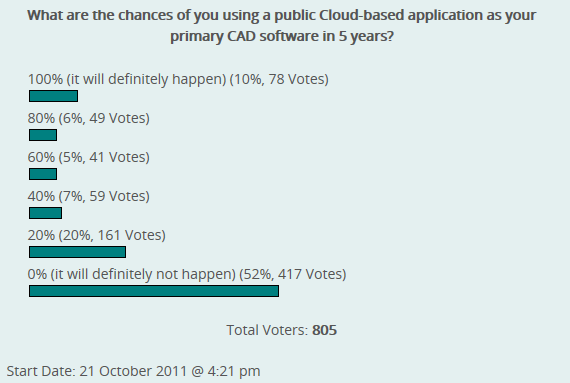 As you can see, this blog’s readers were less than convinced about the inevitability of that Cloudy future. Not so Carl Bass, who had this to say in an April 2012 TechCrunch interview:

I’d say two to three years from now, every one of our products will be used online. The only way to use them will be online.

Here’s what I had to say about that:

So let’s say you’re an AutoCAD user. A successful Cloud push by Autodesk will mean that you and very large numbers of people just like you be using AutoCAD or an equivalent Autodesk product on the Cloud by 2014 or 2015. If that doesn’t happen for you and all the other users of Autodesk products, then that’s failure by definition. Autodesk will have failed to meet its own publicly stated goal, and that’s exactly what I’m expecting to happen …. I am convinced there is a dichotomy between the expectations of Autodesk and those of its customers, and that spells trouble. Autodesk is either going to succeed in pushing its customers into a future they are not expecting, or it is going to fail and be forced to revise its expectations. I predict that the latter will happen…

It’s now way past Carl’s predicted online-only timeframe. A successful strategy by Autodesk would mean we Autodesk customers would have all have been exclusively CloudyCADing for a couple of years by now. Is that what happened?

Knock me down with a feather, it turns out that Autodesk’s big Cloud-only push has worked out just as predicted, not by Carl but by the readers of this blog. Take a bow, Nostradamuses!

Yes, there are now Cloud-saving options in a lot of Autodesk’s software, as there are in most competitive products. Yes, Autodesk is still attempting (often astonishingly badly) to online-tie-in desktop CAD users. Yes, Autodesk has a lot of Cloud-only software products, even if many of them don’t generate revenue and some of them are headed for the chopping block. Yes, some of Autodesk’s online offerings now have utility. Yes, there are many students and hobbyists out there, often isolated from commercial and production realities, having fun tinkering with Autodesk’s largely free online software and in some cases producing some seriously cool stuff that looks great in Autodesk publicity material.

Real paying customers, using Autodesk Cloud-based products as their primary mission-critical CAD software in a production environment? Not so much. People are still using that terribly old-fashioned desktop software for that. Autodesk has failed to make reality conform with Carl’s prediction.

Why should I care? I care because Autodesk has taken vast sums of money from AutoCAD customers, and is trying hard to extract even larger sums via its compulsory rental scheme. Instead of spending that cash on genuinely useful improvements to the product that is the source of that income and the basis for many of its vertical products generating further income, Autodesk has left AutoCAD to wither on the vine. It has been some years since an AutoCAD upgrade was anywhere near good enough to be worth the amount Autodesk currently charges for maintenance, let alone the trebled(?) amount it likes to think it can get away with charging in a couple of years.

It’s not because there’s no potential for improvement, either. Autodesk gets a lot of feedback about what could be improved in AutoCAD, but ignores most of it, sometimes choosing to do dumb things instead that make things worse. In contrast, Bricsys has proven that it’s possible to make huge strides in improving a straightforward 2D/3D DWG-based desktop CAD application in a single year; Autodesk’s efforts are woefully inadequate in comparison. Meanwhile, by chasing an elusive exclusive Cloudy cornucopia, Autodesk has frittered away a fair fortune on a plethora of production-pointless products.