Disclaimer: I’m making money using BLADE. I’m using it on a paying project right now (well, not while I’m typing this, but you get the idea). I’m developing a routine to automate a massively repetitive task for one of my AutoCAD-using clients, and I’m developing it in BricsCAD and BLADE rather than AutoCAD and VLIDE.

I can simply develop faster in the more modern environment, and BricsCAD’s significantly quicker start-up time helps with that. So does the fact that the routine runs several times faster in BricsCAD, making testing the large data sets much more efficient. I’m getting paid on results and not by the hour, so using BLADE is putting cash straight into my pocket while giving me more time to walk my dog.

Using BLADE in production, I’m discovering a few bugs, quirks and things I don’t like. That’s totally understandable with a new feature of this level of complexity and functionality. Where I think it makes sense, I’m submitting problem reports or feature requests to Bricsys. I’m sure Bricsys already has a bunch of these from other developers, so they’ll be very busy for a while. From past experience, I know my reports will be taken seriously and acted on appropriately in a timely manner, if it’s feasible to do so. Your LISP IDE feedback won’t be ignored for decades by Bricsys.

One of the things Torsten Moses mentioned to me that didn’t make it into the published interview was that many developers are very conservative. There’s some truth in that. I’m missing certain keystrokes, for example: 1978-era WordStar Ctrl-Y to delete a line, anyone? It’s a reasonable expectation that as more VLIDE users migrate to BLADE, many requests will come in for VLIDE-like things. I’m told that some of these things will be provided in coming months.

In the meantime, there are things we conservative developers can do to make ourselves feel more at home. One of these is to configure the editor appearance. Here’s the VLIDE editor:

One of the great things about BLADE is how configurable it is, and I know Torsten’s working right now on making it even more so. Configurations are stored in the Registry in a version-independent location (HKCU\Software\Bricsys\BricsCAD\VLispDbgEditor). These can be exported and imported directly or via BLADE, so multiple complete setups and configurations can be managed.

In this post, I’m going to be going through the process of configuring BLADE’s editor appearance to make it look more like VLIDE. I’m not suggesting that’s necessary or even a good idea in most cases, but if you really want to do it, here’s how.

Note: before you do all this manually, please note that at the end of this post I will provide a configuration file that will do it for you.

I like my non-matching setting to be white on red (the inverse of a normal parenthesis so it shows up):

Changing all that should give you something that looks like this. Familiar enough? 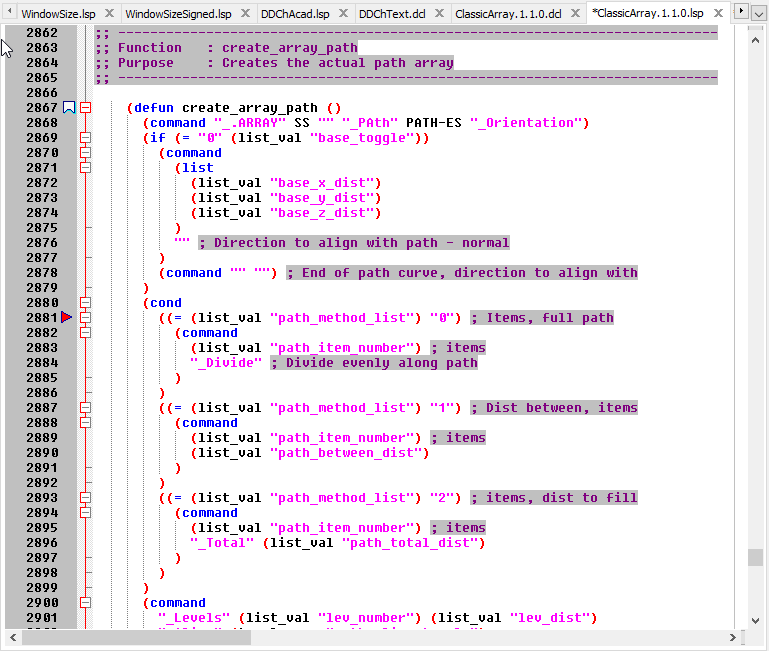 There are several things in the above image that might be unfamiliar but which I suggest you leave turned on because they’re useful. If you really insist, here are the locations for these settings in the Preferences & Settings dialog:

Unlike VLIDE, the default in BLADE is to use spaces for indentation, not tabs. As I don’t know of any LISP developer who uses tabs except by accident, this is a much more sensible default. But if you really want to use tabs, turn it on using Preferences > Use tabs and set the width to the VLIDE default of 8 in Preferences > Set tab width.

If you’ve left opening parentheses on previous lines and have indented the following code as usual, then as you go on to finish off the code with closing parentheses, in BLADE a single backspace will take you back your indent width (2 spaces by default) rather than a single space as in VLIDE. If your coding finger can’t get used to this keystroke-saving feature, you can turn this off with Preferences > Backspace unindents.

Having done all that, and having arranged the rest of the interface to your needs (overall window size, pane and field widths, etc.), make sure you save it! It’s as simple as Preferences > Save preferences, but it’s not done automatically. If you want to keep a safe copy of your settings, you can do so with Preferences > Save preferences to file. This simply exports the relevant part of the registry to a .reg file of your choice. This is a text file you can hack about with at your leisure (using BLADE if you like!), and you can even make files that represent subsets of your preferences.

For example, I’ve removed all but the style settings from a .reg file I exported. I’ve uploaded it renamed as a .txt file because .reg files are considered dangerous by browsers, etc.

If you want to use this to give BLADE that old familiar VLIDE look, here are the steps.

That should do it. Happy BLADEwork!