While I welcomed that, I did have this to say at the time:

I don’t think such a guarantee is realistic, given that the nature of subscription software is to only work when it knows you’ve paid up. At least it demonstrates that the desire is there right at the top to try to prevent such debacles from occurring in future.

Autodesk watchers know that words mean little and actions are everything. I look forward to Andrew sharing news of the actions he’ll be taking to make good on his promise.

Back to the present. Does it come as a surprise to anybody to discover that less than a month later, Autodesk has again accidentally remotely killswitched people’s licenses? Again, not just the new release, but 2018 too. As reported on Twitter and www.asti.com: 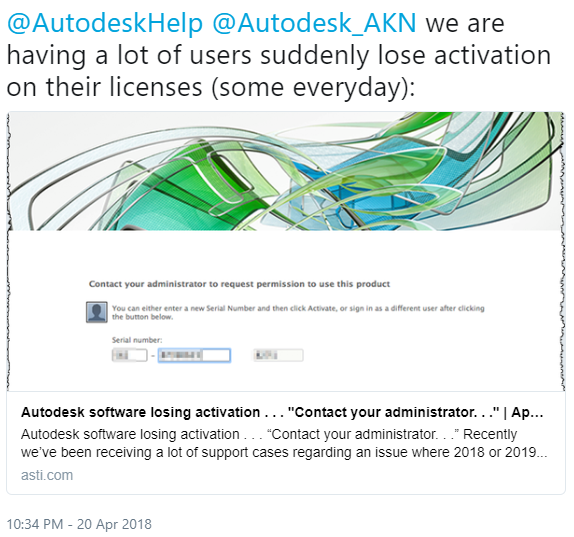 After a couple of exchanges, the always-responsive people on the @AutodeskHelp Twitter feed came back with this: 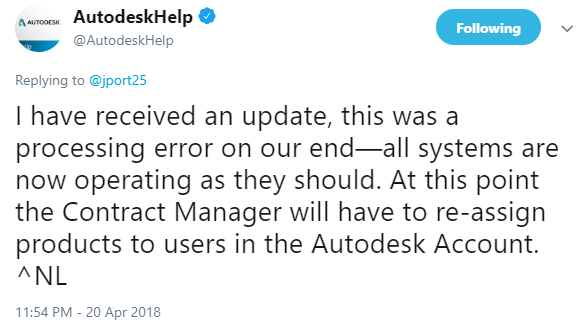 So it’s fixed, but CAD Managers now have a bunch of work to do at their end to deal with a problem created at the Autodesk end. Somebody screwed up, they fixed it, another apology is issued, stuff happens, life goes on.  That’s it for this month, probably. But it doesn’t address a very fundamental problem.

Let’s go back to basics.

The primary function of a licensing system is to allow use of the product by legitimate users.

Everything else is secondary. If a system relies on phoning home and getting the required response from a remote system before you’re permitted to use the software you paid for, not just after installation but on an ongoing basis, then it’s fundamentally flawed from the user’s point of view. Yet that is the system that Autodesk has chosen to base its business on.

No amount of sincere, deeply felt apologies or it’ll-never-happen-again promises will alter the fact that Autodesk has put its own convenience ahead of the ability of paying customers to use what they have paid for. Will Autodesk change that state of affairs? I very much doubt it, in which case it’s inevitable that this kind of thing will happen again, whatever anyone might promise.